The 610 Extension Project will provide the final connections between Trunk Highway 610 to County Road 30 to complete the roadway system envisioned as part of the overall TH 610 project.  It provides improved regional and local connections to I-94, TH 610 and County Road 30. The County Road 30 corridor, as it extends to the west serves a larger are between Highway 55 and I-94 that currently goes unserved.

The project consists of a 4-lane roadway connection between County Road 30 and I-94, a connection across I-94 to Highway 610 and ramps to I-94 Eastbound and from I-94 westbound to the 610 extension, as shown here: 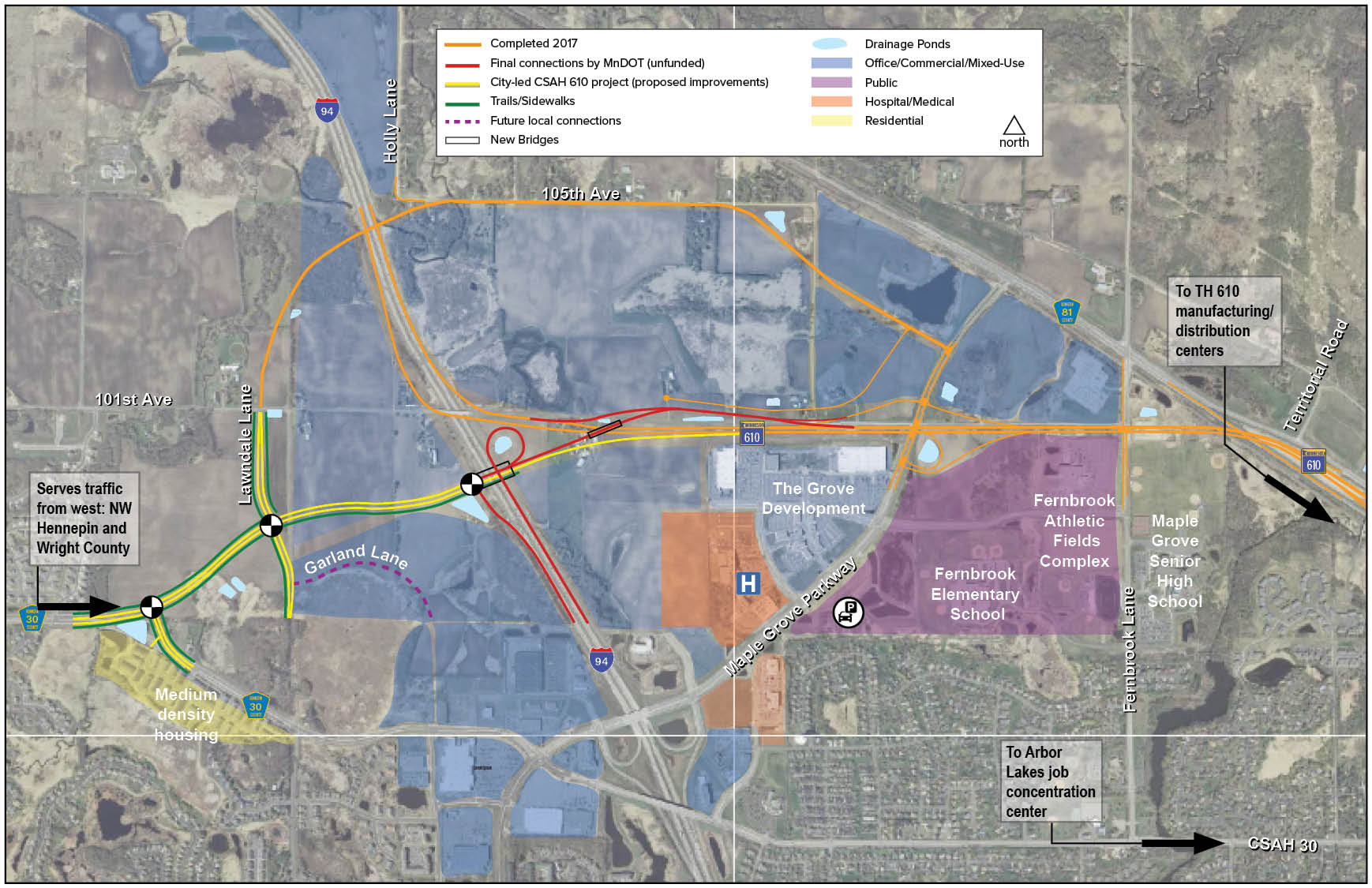 Highway 610 has been poised to become a major corridor in the northern Twin Cities Metropolitan Area since 1973. Originally proposed as a “North Crosstown” for the rapidly developing suburbs in the 1960s, route studies began in the 1970s. However, a lack of funding delayed the project until the mid-1980s when the first segments were completed.

In 1986, Highway 610 was constructed between Highway 252 and the junction of Highways 47 and 10. This roadway provided drivers with the only river crossing between Highway 169 in Anoka and I-694 in Brooklyn Center. Property values in Coon Rapids jumped after the bridge was constructed, due to better access to I-94 and downtown Minneapolis.

In 1991, the project received a $36 million boost when north suburban mayors traveled to Washington, D.C. to lobby for federal funding. Their trip was the culmination of more than two decades of planning and lobbying by civic leaders. This funding was used to extend Highway 610 east to Highway 10 in 1999 and to
Highway 169 in 2000. The early 2000s saw funding to extend and connect Highway 610 from Highway 169 to I-94 with limited connections to I-94.

The City of Maple Grove and Hennepin County have invested significantly within the project area by relocating and enhancing local infrastructure in anticipation of Highway 610. The city has used their available resources to construct the new Maple Grove Parkway interchange with I-94 at a cost of over $30 million to replace the sub standard County Road 30 interchange. The City of Maple Grove also invested heavily in the area around the Highway 610/CSAH 81 roadways to prepare the local infrastructure for the Highway 610 corridor. The Highway 610 segment from Highway 169 to Elm Creek Boulevard was completed under a design-build contract using primarily a federal ARRA grant. The Highway 610 segment from Elm Creek Boulevard to I-94 has been constructed utilizing Minnesota Corridors of Commerce funding. Local officials continue to seek funding to complete connections of Highway 610 to eastbound I-94 and to CSAH 30.

The 610 Extension is a vital east-west link for the growing northern suburbs.  The 610 Extension Project will provide improved regional connections to three important roadways in the northwest Twin Cities Metropolitan Area.  The project will help promote jobs and economic development in the region by improving connections between areas west of I-94 to other job centers in the region, including major employers along Highway 610.  There are over 600 acres of mixed-use development planned in this area and a new regional hospital that is encouraging the development of additional medical facilities. 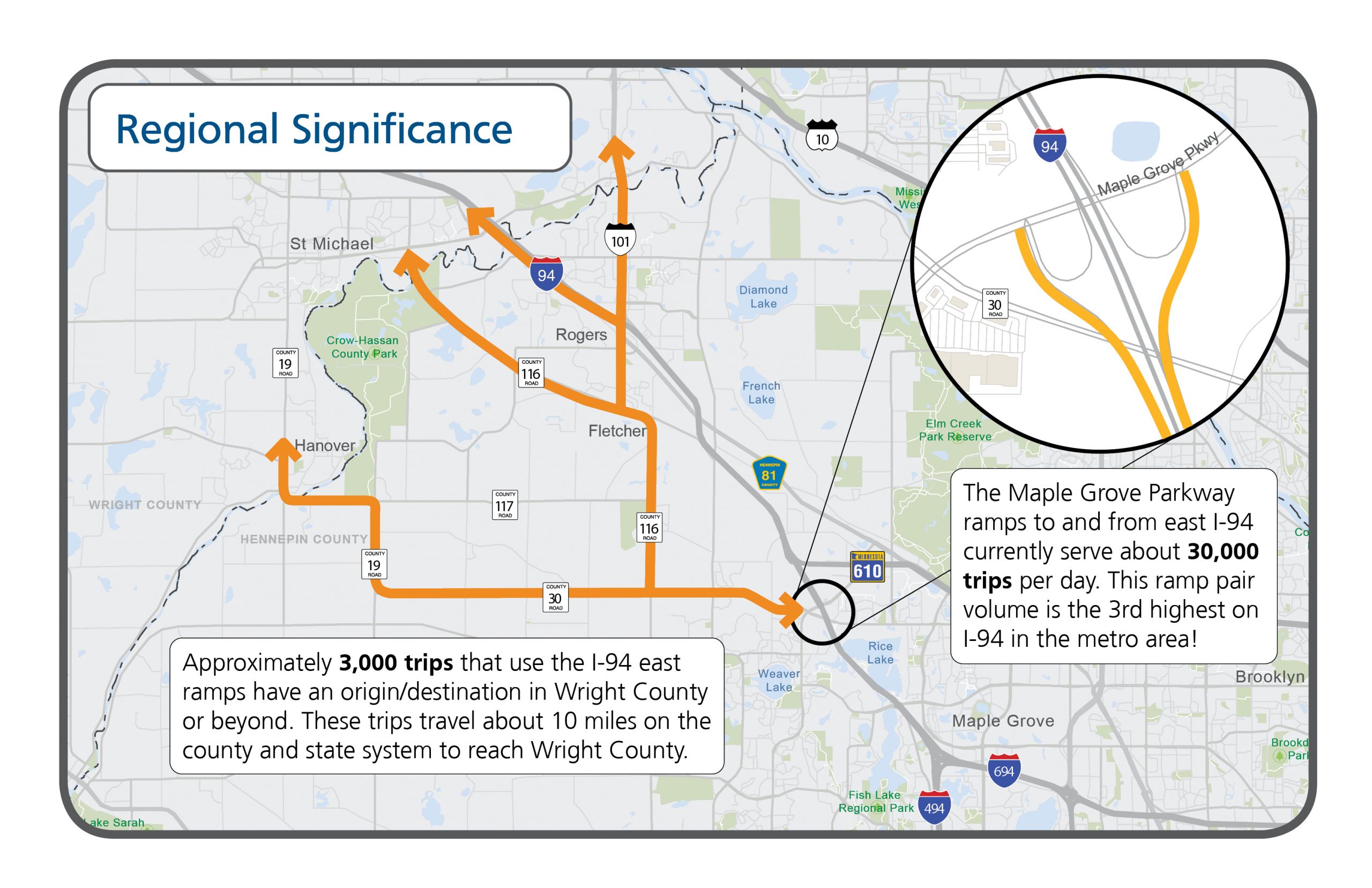